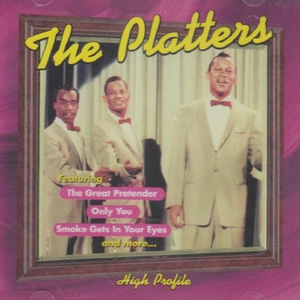 "The Great Pretender" is a popular song recorded by The Platters, with Tony Williams on lead vocals, and released as a single on November 3, 1955. The words and music were written by Buck Ram, the Platters' manager and producer who was a successful songwriter before moving into producing and management. "The Great Pretender" reached the number one position on both the R&B and pop charts in 1956. It also reached the UK charts peaking at number 5. Read more on Last.fm.

Tracks by The Platters:

Smoke gets in your eyes
The Platters
Play

Only You
The Platters
Play

Come Go With Me
The Del-Vikings
Play

In the Still of the Night
The Five Satins
Play

All I Have To Do Is Dream
The Everly Brothers
Play

A Teenager in Love
Dion & The Belmonts
Play

There Goes My Baby
The Drifters
Play

I Only Have Eyes for You
The Flamingos
Play

At The Hop
Danny & The Juniors
Play

Only the Lonely
Roy Orbison
Play