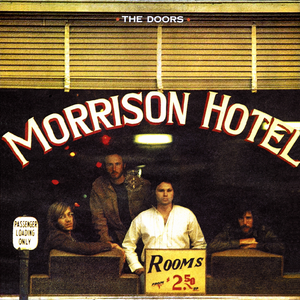 Queen of the Highway

Queen Of The Highway is a song by the rock group The Doors, from their 1970 album Morrison Hotel. It is the ninth, and third-to-last track on that album. The lyrics were written by lead singer Jim Morrison and are believed to be about his girlfriend Pamela Courson, with the lines "She was a princess / Queen of the Highway" referring to her, the "He was a Monster / Black dressed in leather" being a description of Jim Morrison himself, and the "I hope it can continue / Just a little while longer" lines being perhaps Read more on Last.fm.

You Make Me Real
The Doors
Play

I Am the Walrus
The Beatles
Play
Login or Create account Save and share your playlist with your friends when you log in or create an account.
Playlist Your current playlist is empty.
Title