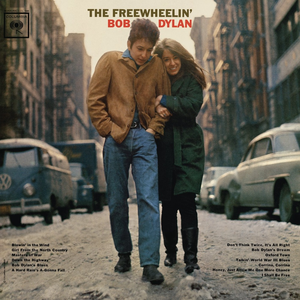 "Masters of War" is a song by Bob Dylan, written in 1963 and released on the album The Freewheelin' Bob Dylan. It is an adaptation, with new words by Dylan, of "Nottamun Town". As with many of the major songs Dylan composed at this time, he often adapted or "borrowed" melodies from traditional songs. On this occasion however, he had borrowed an arrangement by veteran folksinger Jean Ritchie. The arrangement of "Nottanum Town", unknown to Dylan, had been in her family for generations, and Ritchie wanted an acknowledgement on the writing credit. Read more on Last.fm.

Down the Highway
Bob Dylan
Play

The Needle and the Damage Done
Neil Young
Play

Which Will
Nick Drake
Play

Place to Be
Nick Drake
Play

I Won't Be Found
The Tallest Man on Earth
Play

A Case of You
Joni Mitchell
Play

Me And Julio Down By The Schoolyard
Paul Simon
Play
Login or Create account Save and share your playlist with your friends when you log in or create an account.
Playlist Your current playlist is empty.
Title